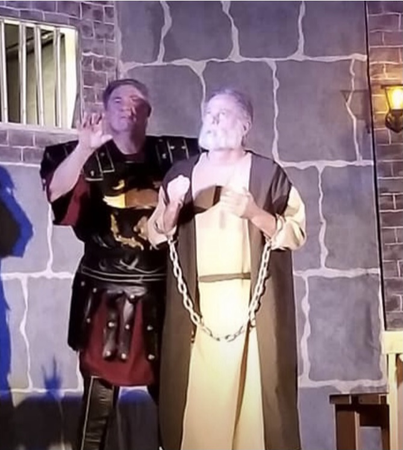 Home
About
Get There
Tickets

The Prisoner of God

By Howi Tiller (other events)

“The Prisoner of God”, is a fully staged two man production. Howi Tiller and Terry Vik have performed this script before audiences across the the U.S. It is a poetic glimpse into the life of the apostle Paul while in prison. It is here that he waits for his chance to make his case before Nero.  That chance never came.  However, tradition and historical writings convey to us that Paul even witnessed to the soldiers guarding him.  Marcus, a zealous battle tested Roman Captain thinks it is beneath him to be assigned to guard the likes of an aged and shackled preacher. It is here in the Mamertine prison however, that even the coldest and calloused soldier is touched by the word God through the faith of Paul.  Inspirational - Educational

The story is a wonderful mix of scripture, suspense and humor.

other events by this organization